25 Memorable Things to Do in Salem, MA

Salem, Massachusetts, is a small town with an outsized history. While its high season peaks at Halloween, its historic buildings and picturesque Northeast scenery make for a spectacular trip any time of year. While the Salem Witch Trials are what put the town on the map (and still draws over 1 million tourists annually), there are still plenty of other fun things to do in Salem, MA.

What to Do in Salem, Massachusetts 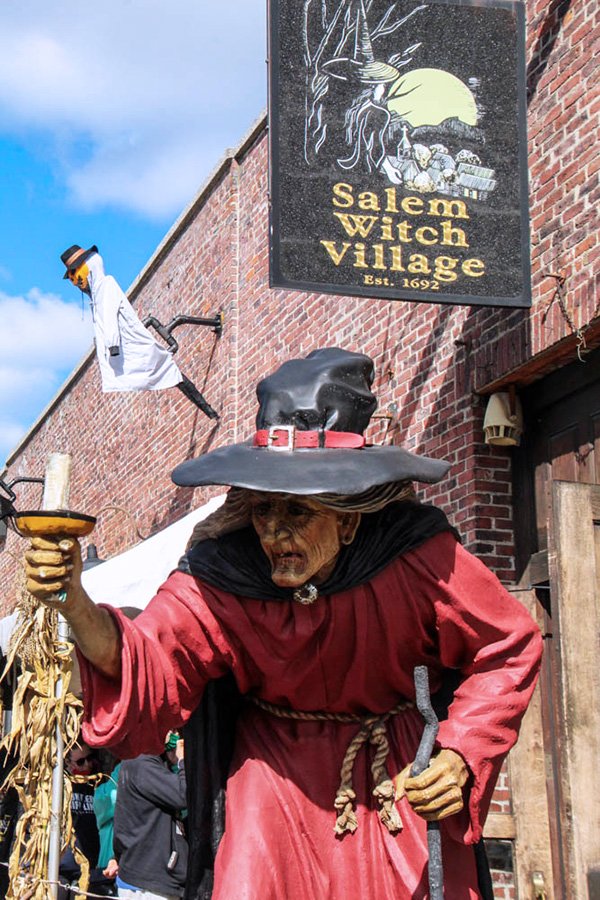 The Salem Witch Village is the center of all things spooky in Salem, MA— especially when October rolls around. It's home to the Salem Wax Museum, the Salem Witch Trials Memorial, and a number of souvenir shops and cafes. 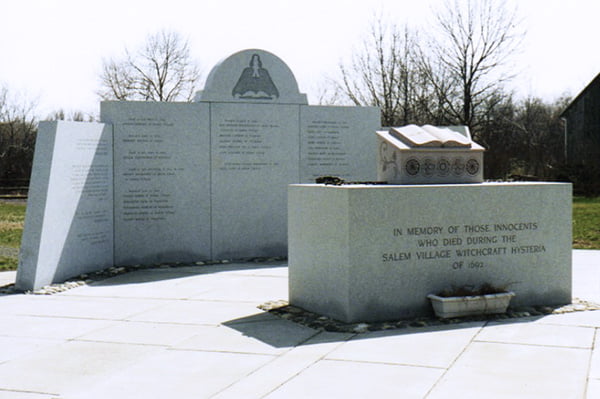 No visit to Salem, MA, is complete without a trip to the Salem Witch Trials Memorial, a simple yet dramatic memorial to the twenty victims of the 1692 trials. The quotes etched on the stone are the words of the accused, taken directly from court transcripts. "It is important that people think about real human suffering caused by witchcraft hysteria and the lessons that are to be learned from that dark period in the history of this city and this country," said memorial designers James Cutler and Maggie Smith, winners of the public design competition.

3 Step Back in Time at the Pioneer Village 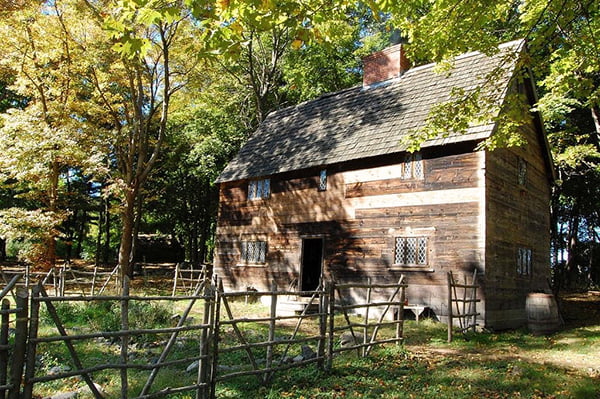 Want to see what life was truly like during colonial times? Time travel to 1630 with a trip to the Pioneer Village, America's first living history museum.

The three-acre village is home to numerous examples of 17th-century colonial architecture— including a schoolhouse, blacksmith forge, print shop, and the Governor's Faire House— relocated to the site or built using traditional methods and materials. Admission is just $5 per person, making it one of the more affordable things to do in Salem, MA.

4 Hop on a Salem Trolley Tour 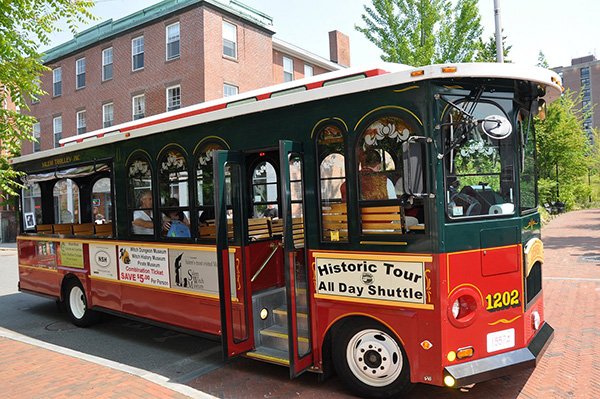 A trolley tour of the town is a great way to see Salem's Pinterest-perfect Halloween decorations, historic architecture, and charming streets in a short amount of time. The narrated one-hour tour highlights the area's most popular attractions, making it a great activity to do on your first day in town. 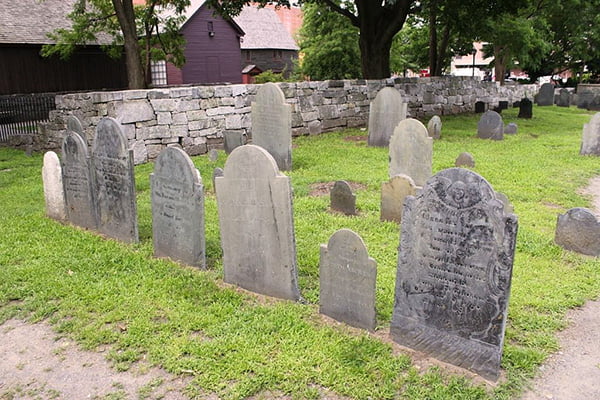 Burying Point Cemetery is one of the oldest cemeteries in the United States, dating back to 1637. It contains the gravestones of the judges in the Salem Witch Trials, making it a must-see along your tour through Salem's past. But heads up, the cemetery is only open to the public (for free) for a few hours in the afternoon.

6 Stroll Through the Salem Common 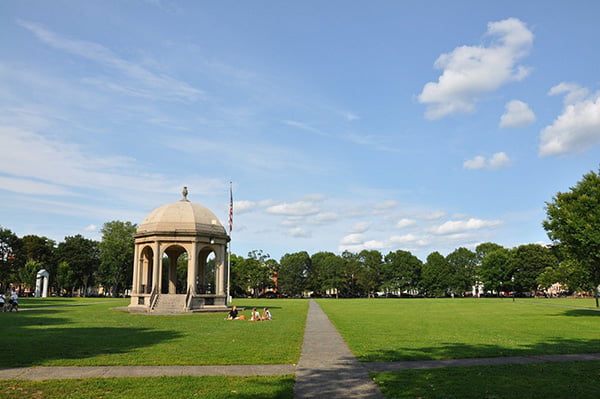 Searching for free things to do in Salem, MA? Head to the historic Salem Common, an 8-acre public park in the heart of downtown Salem. A common area since the 17th century, it's the perfect spot for a lunchtime picnic or afternoon coffee break between seeing surrounding historical sites. 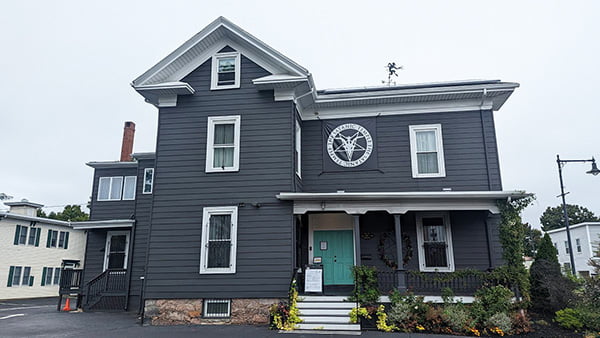 Located inside the national headquarters of an occult organization, the Salem Art Gallery features an art collection unlike any other. While you won't find works from big-name mainstream artists, you'll get to experience The Satanic Temple, an eight-foot bronze Baphomet statue, and other macabre creations. 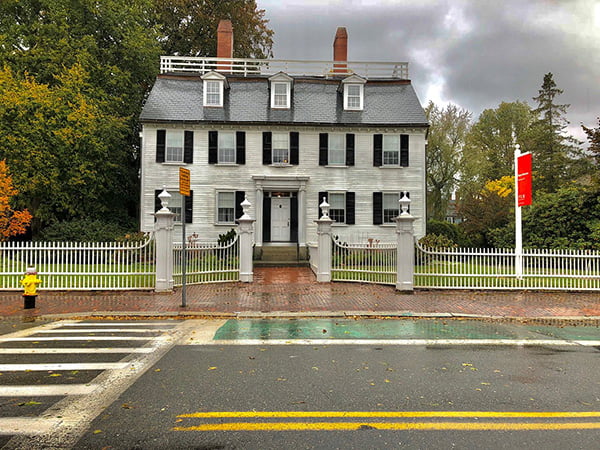 Fans of the legendary Hocus Pocus films can check a few filming locations off their list while visiting Salem: The Ropes Mansion, Pioneer Village, Salem Common, Old Town Hall, and more! You can even stay in a recreation of the Sanderson Sisters' cottage in the woods (if you dare).

Need a break from all the spooky stuff? Visit the Peabody Essex Museum, which dates back to the East India Marine Society, established in 1799. Its collection includes everything from American and Asian art to shrunken heads, carved ivory, and other global curiosities. 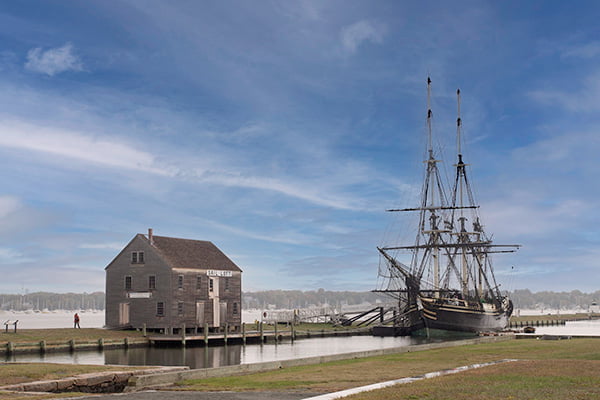 11 Stop by the Salem Witch Museum 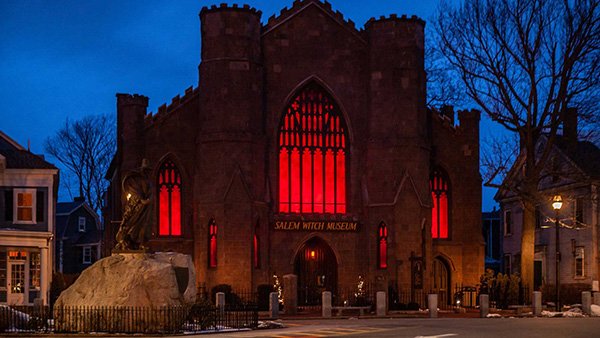 Learn the true history of the historic town with a trip to the Salem Witch Museum. Instead of your typical artifacts tucked behind glass, the popular Salem attraction features live dramatizations based on actual documents and events. Prepare for an immersive, emotional experience that'll change the way you look at early American history.

12 Immerse Yourself in the Witch Dungeon Museum 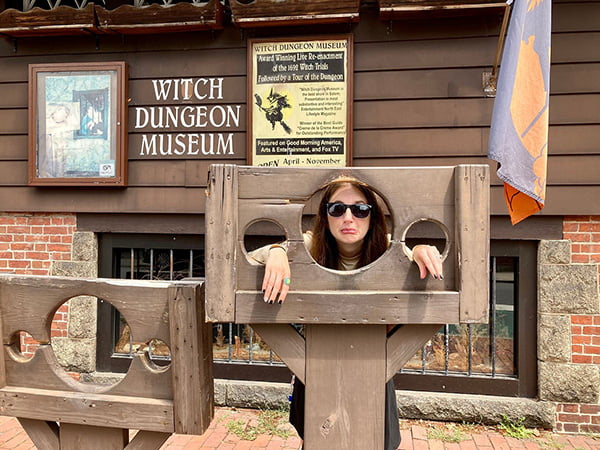 The moment you step foot inside the Witch Dungeon Museum, you'll feel as if you've stepped back in time to Salem Village in 1692. Before taking a guided tour of the dungeon, visitors can watch an award-winning live reenactment adapted from historical transcripts of the 1692 Witch Trials.

13 Snap a Picture of the House of Seven Gables 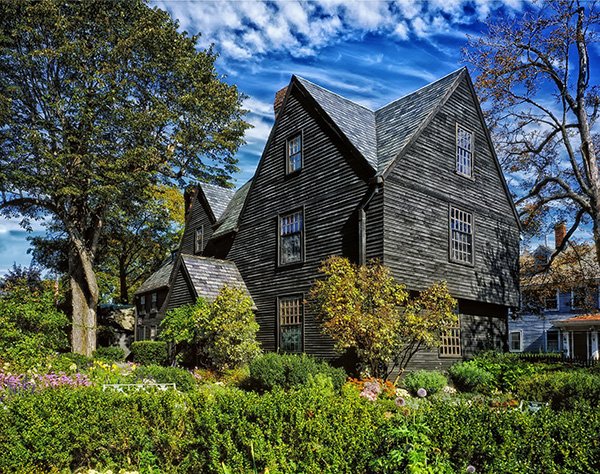 The House of Seven Gables (also known as the Turner House) is a colonial mansion made famous by the 1851 Nathaniel Hawthorne novel of the same name. Designated a National Historic Landmark District in 2007, much of the property's original period features have survived to this day through extensive conservation efforts. Its unique architecture makes it one of the most instantly recognizable Salem attractions. 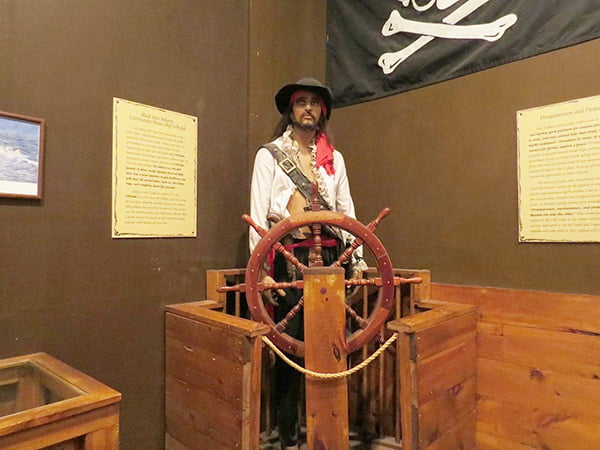 For a break from all the witch hunt hysteria, head to the New England Pirate Museum to relive the adventures of notorious sea robbers like Captains Kidd, Bellamy, Quelch, and Blackbeard. The small museum features artifacts and authentic pirate treasure that'll please plank walkers of all ages! Tag along for the 20- to 30-minute walking tour to visit a recreated dockside village and board a real-life pirate ship. 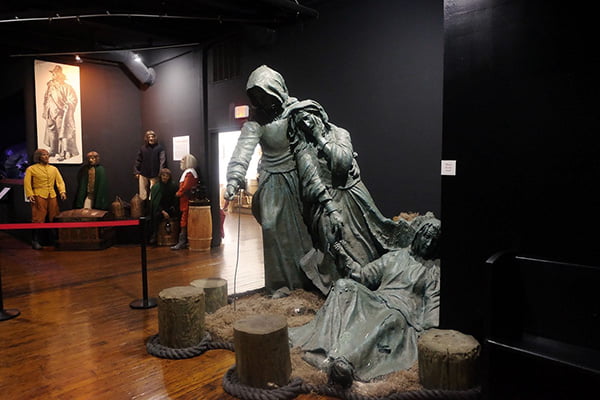 The Salem Wax Museum of Witches and Seafarers brings Salem's history to life through life-like wax figures depicting scenes from the town's founding and maritime history to the infamous Witchcraft Hysteria of 1692. Visit the gift shop on your way out for t-shirts, books, confectionaries, and complimentary gravestone rubbings. 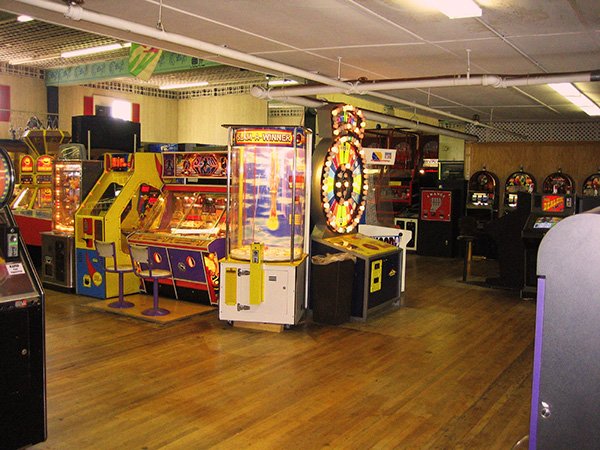 The Salem Willows Arcade is undoubtedly one of the best things to do in Salem, MA, with kids. A local favorite since it first opened in 1853, the 35-acre waterfront park and arcade offers games and activities for all ages, including bumper cars, water boats, basketball and tennis courts, and a carousel dating back to 1905. It's a blast from the past with the best popcorn around! 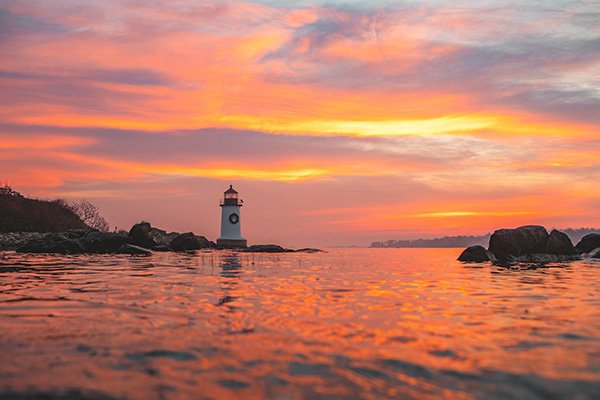 Military buffs should make time to visit Fort Pickering, a 17th-century military fort on Winter Island, during their trip to Salem, MA. First used for military purposes in 1663, the site is the oldest known military landmark in the area. The picturesque view of the Fort Pickering Lighthouse located on the edge of Salem Harbor is worth the trip alone. 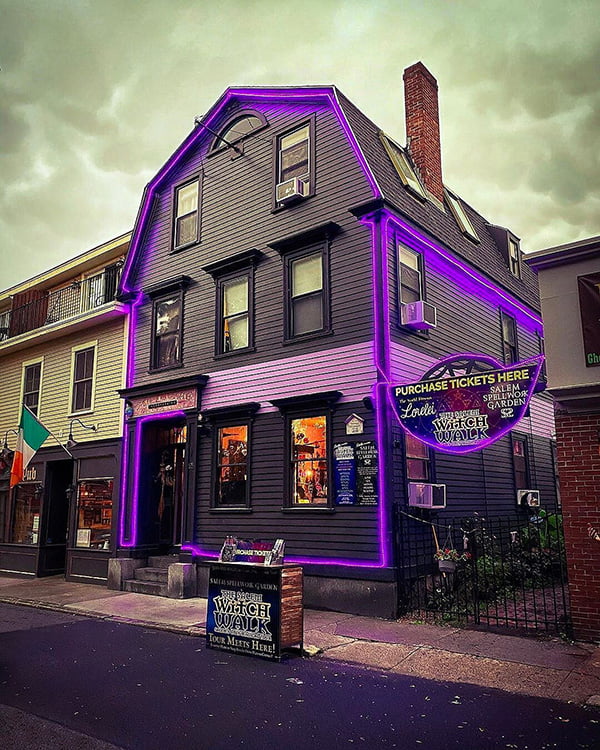 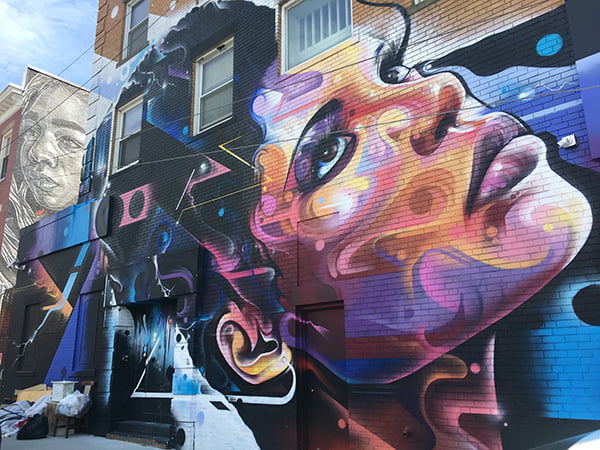 El Punto is a neighborhood in Salem, Massachusetts, known for its lively atmosphere and public art installations. The Punto Urban Art Museum— a mission-driven social justice art program— features over 75 large-scale murals by world-renowned and local artists. It aims to revitalize the neighborhood by breaking down socio-economic barriers, celebrating the talents of Salem creatives, and supporting local businesses by drawing out-of-town visitors to the neighborhood.

20 Play a Round of Golf at the Olde Salem Greens 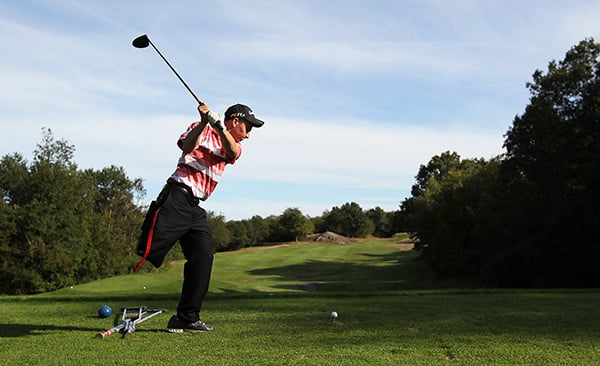 Golfing enthusiasts can check another course off their list with a trip to the Olde Salem Greens at Highland Park. Built in 1933, the nine-hole course features sweeping views and well-groomed fairways and greens that'll challenge beginner and experienced golfers alike. Or head to the putting green to practice your technique and soak up the Northeast sunshine. 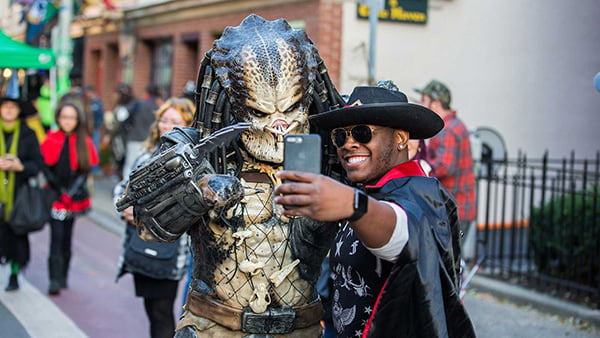 Haunted Happenings is the town's Annual Halloween celebration and runs throughout the entirety of October. Since 1982, the fall harvest has thrilled guests with live music, theatrical performances, haunted houses, ghost tours, a Grand Parade, and the beloved Haunted Biz Baz Street Fair. Check the Haunted Happenings website or download their free app for a schedule of events and activities.

22 Take the Salem Ferry to Boston 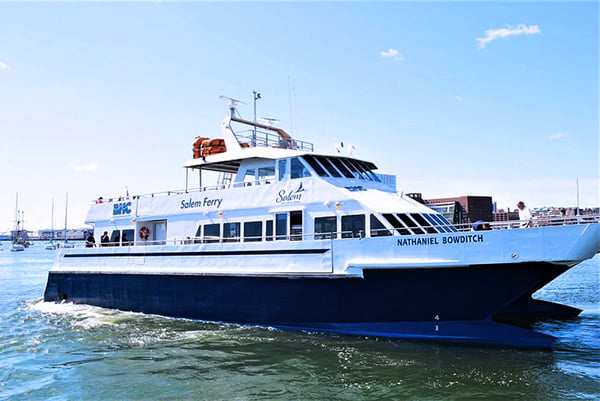 If you're staying in Salem, Massachusetts, long enough for a day trip, skip the train and take the Salem Ferry to Boston instead. The high-speed catamaran offers round-trip service from the Salem Ferry Terminal on Blaney Street to Boston's Long Wharf. Throughout the 50-minute journey, you'll be able to enjoy views of the water and skyline.

One of the most fun places to shop is on Essex street. Here, you will find some interesting, weird, and even strange boutique stores. This is a great place to visit if you are looking for a fun and lively atmosphere.

At the end of the mall, stop by and check out the 6-foot bronze statue of Elizabeth Montgomery. She played one of the most famous fictional switches of all, Samantha, on "Bewitched."

24 Visit The Witch House at Salem 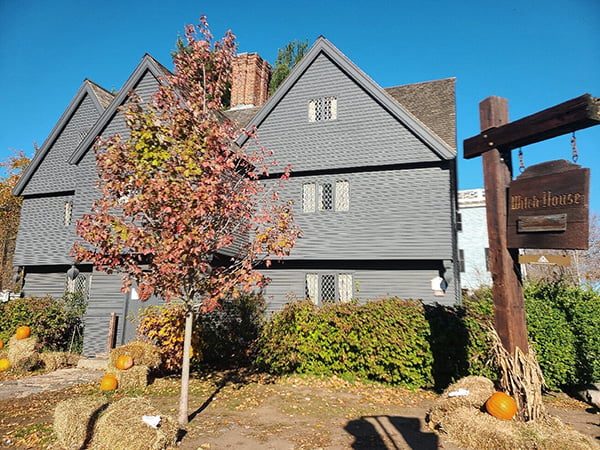 The Witch house was the home of Judge Jonathan Corwin and is locally known as the Witch House. This house is the only structure still standing in Salem that directly ties to the Salem witch trial of 1692. 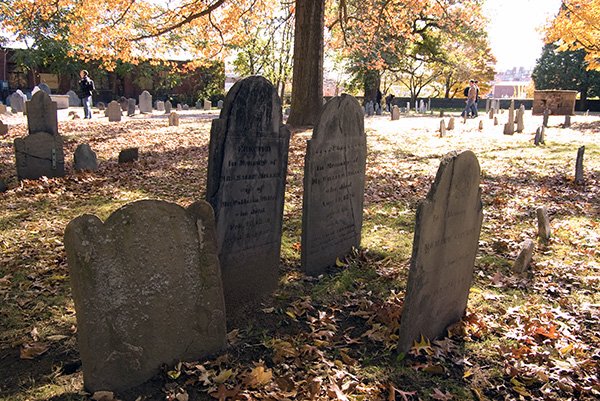 Fiona is a veteran travel consultant, photographer and travel writer. Her many years of experience providing elevated customer experiences and trip planning had her traveling the world from her computer. She has spent many years as a corporate travel consultant and decided to actually live the life rather than plan it for others!

Hvar Croatia Travel Guide: Attractions, Things to Do And More

Marbella, Spain: A Travel Guide- Attractions, Things To Do And More

The 8 Best Marco Island Resorts For A Floridian Getaway

Split, Croatia Travel Guide: Attractions, Things to Do And More

SEARCH FOR THE CITY YOU WANT TO VISIT